Contrary to popular opinion, visiting Vilnius in February can be a good option. The city is not crowded, tickets are less expensive, and there is a high likelihood that Vilnius will look like a beautiful, white fairytale. In addition, a lot of things happen in Vilnius, cause February is a very significant month in Lithuanian history. For all those reasons, it is worth to include Vilnius in your travel list this month.

So if you decided to turn up to the capital of Lithuania in February, keep on reading our traditional article. We are ready to help you to plan your visit in Vilnius and find the great things to do here!

Have you heard about “Cepelinai”- the most famous Lithuanian traditional food? This smashed potato dumpling stuffed with meat and served with bacon and sour cream, even has its own day- that is the first Sunday of February.

The “Cepelinas” day was invented by Lithuanian-American community in 2014 during the Super Bowl championship. American Football finals take place on each first Sunday of February and are considered to be an unofficial national celebration in the United States. It attracts millions of fans of all the nationalities and draws people together for large annual viewing parties. Nevertheless that American football is completely unpopular in Lithuania, Lithuanian-American community adapted to local habits and became devoted fans of the game. During the Super Bowl Sunday in 2014, Juozas Vaiciunas, member of the Lithuanian-American community in Detroit, discovered that the ball has a surprisingly similar  form to „Cepelinas“ –  Lithuanian traditional meal. He got an idea to renounce international “Cepelinas“ day on Superbowl finals and encourage people to cook, taste and gather to eat it together. Soon a Facebook page, logo and the special T-shirts dedicated to“Cepelinas day“ were created.

Don’t miss a chance to taste „cepelinai“ in Vilnius on this occasion.

Snekutis. Not luxurious, not expensive, but creates an atmosphere of the truth Lithuanian village tavern. The owner has three bars in different locations: Polocko str. 7a, St. Nicholas str 15 and St Stepono str. 8.

11th of February: Iceland was the first to recognize Lithuania in 1991

On March 11, 1990 Lithuania re-declared independence and was the first from Soviet Union states to do so. After the declaration act was signed, a long way to international recognition begin. As Soviet Union was still powerful, the other countries were cautious and did not rush to include Lithuania into the world‘s map. Moldova was the first of all the former Soviet Republics to recognize Lithuania’s freedom on 31 May 1990. Nevertheless, Moldova at that time still belonged to SSRS.

Iceland was the first  from the countries outside Soviet Union to acknowledge the reborn Lithuanian state in 1991 February 11, immediately after the bloody January in Vilnius. Before making this step, Iceland even ensure another source of oil, in case if Soviet Union embargoed it as a revenge for recognition of Lithuania. “It was an example of courage, respect for freedom and solidarity of a small nation,” as Lithuanian President (Dalia Grybauskaite) said.

To express the nation‘s gratitude, the street in Vilnius Old Town has been called ‘Iceland Street’ since 1991.

In 2014, the Constitution of the Republic of Užupis was translated into Icelandic, and arranged at Paupio street next the plates in other foreign languages. Last year the Mayor of Vilnius unveiled a new plaque n Iceland Street 1 on which the name of the street is written in Icelandic. 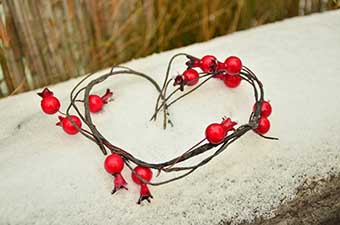 Valentine‘s day is a fairly new concept in Lithuania. It only started to be celebrated after Lithuania regained independence in 1990.  That is why part of the older generation is still a bit skeptical about the day of love, emphasizing that it was imported from „The West“ and has no connection to Lithuanian culture. On the other hand, St Valentine’s traditions were quickly adopted  among youth. On this occasion, children, usually spruce their faces with heart-shaped stickers, the couples go out for a romantic date and changes small gifts such as flowers and sweets.

Each year, on 16th of February just after the day of love, we, Lithuanians, enjoy the national holidays. On this day, in 1918 as the First World War was coming to an end,  the act of the declaration of Lithuanian independence was signed. After more when 100 years being  in the grip of Czarist Russia hands, Lithuania appeared on the maps of Europe again.

To mark the 100 years anniversary of the Independence of Lithuania plenty of parades, public speeches, festivities, and other exciting state-supported entertainment will take place in Vilnius. The main solemn show will happen next to the House of Signatories, where the Act was signed. Cathedral square will host a free public concert in the evening. Have in mind that the public transport is free on this day, so use it!

46 days before Easter Lithuanians celebrate Shrovetide (lith. Uzgavenes) the last and the funniest winter celebration. The aim of the fiesta is to get winter away and to welcome the upcoming spring. Shrovetide in Lithuania is not imaginable without masquerades: people dressed as witches, devils, gypsies, beggars, wondering in the cities streets or from house to house asking for sweets or money.  As this is the last day before the fasting of Lent, it is essential to fill yourself with hearty food. Obligatorily meal is pancakes, other special food can be doughnuts, fat pork. One of the traditional attractions of the fiesta is the fight between two characters Kanapinis (the Hemp Man symbolizing spring) and Lasininis (the Fatty associated with winter). After the battle, when the thinner wins, the huge witch-like character, symbolizing winter,  is burned accompanied by shoutings “Winter winter go away“.

If you want to feel this crazy spirit of the merriest festival in Lithuania, you have to visit Rumsiskes, Lithuanian folk museum, that organizes it for more than 30 years. The newspaper “The Guardian” rated it among “10 of Europe’s best alternative carnivals”.

In Vilnius, Shortvide carnival will take place on Tuesday. More information about it here.

Last Tips about the Weather

In February, Vilnius still looks like a winter fairy-tale and usually stays all covered with snow. Normally the coldest period passed away, days are slowly getting  longer and warmer. Extremely freezing temperatures are less likelihood when in January, but all kind of weather is possible.

You can check the weather forecast here.

If you still need more specific information about the things happening in Vilnius, don’t hesitate to write us at info(eta)vilniusfreetour.lt